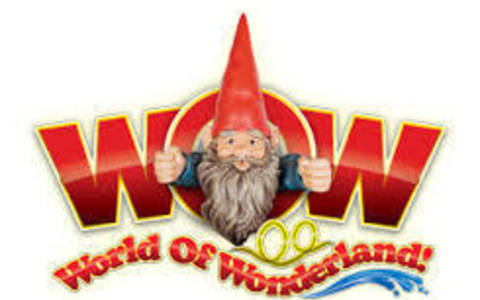 Details On Tours Likes
Wonderland Amusement Park is and has been an ideal place for a family to relax and have fun for a reasonable price for 67 years.

Voted the 2009 Park of the Year by Amusement Today, Wonderland is home to the Texas Tornado, one of the top-rated, double-loop steel roller coasters in the nation, and to over 30 rides, attractions, and miniature golf.

Open weekends April through Labor Day, and open weeknights from the Middle of April through the start of school in August, it can all be summed up in one word; WOW!

Check the Wonderland website for precise pricing information and hours of operation.

PAUL AND ALETHEA'S DREAM
More than 65 years ago with a grand dream to build an amusement park, Paul and Alethea Roads traveled from San Angelo to Amarillo, Texas where they came across a bleak stretch of land in what is now beautiful Thompson Park.

There were no trees, just scrub grass and sand burrs, Mrs. Roads remembered. It was so pitiful, we started back to San Angelo but only got so far as Canyon before we decided to give the location a second look.

With a promise of improvements that included transplanted trees, Mark Miles, the director of Parks and Recreation for the City of Amarillo at that time, convinced the Roads to give Amarillo a try.

After months and months of hard work and perseverance, the Roads long-awaited dream finally came true on August 12, 1951, when Kiddie Land opened its doors for the first time. The Park featured three rides, the Hershell Kiddie Boat Ride, the Lil' Dipper Roller Coaster and the Kiddie Car Ride built by Mr. Roads himself.

Although Kiddie Land was an instant hit with area residents, Mr. Roads had to take another job to make ends meet. During the day, he worked as a fabricator at the Amarillo Air Force Base and at night he ran Kiddie Land. This went on for more than 10 years, until he decided to focus his attention full-time on growing the popular Amusement Park.

In 1969, several new rides were added that appealed to people of all ages, including the ever-popular Bumper Cars. It was at this time that Paul and Alethea decided to change the name from Kiddie Land to Wonderland Amusement Park. Over the next few years, dozens of rides were added, including the famous Fantastic Journey, which Mr. Roads built by hand.

The importance of family has always had a profound influence on the creation and expansion of Wonderland Park. The Roads raised two children at the Park, Danny and Paula. Paula and her husband, Paul Borchardt, now operate the Park continuing the long family legacy.

With a triple major in naval science, marketing and accounting, and an MBA in accounting, Paul brought business acumen to the Park that helped it evolve into the third largest amusement park in Texas.

Paul and Paula's eldest daughter, Rebecca Parker, also works at the Park. She is a CPA with an MBA and serves as controller. Rebecca's children, also help out at Wonderland, marking the 4th generation to help run this family-owned dynasty.

Today, Wonderland Park is an iconic regional landmark that attracts more than 200,000 visitors each year. The Borchardt's continue to operate on a commitment to family values, safety and cleanliness, in which Paul and Alethea built the Park. Sadly, Mr. Roads left this world in 2003 and Mrs. Roads joined him in heaven in 2016.